Basic is beautiful to me for my new under garment sewing creation. Between being extremely useful and complimentary to a woman’s curvy shaping, this undergarment is now a frequently worn winner in my wardrobe of sewn garments. Believe me, once you make an undergarment, you suddenly realize that a complete outfit is really only achieved my working from the inside out. 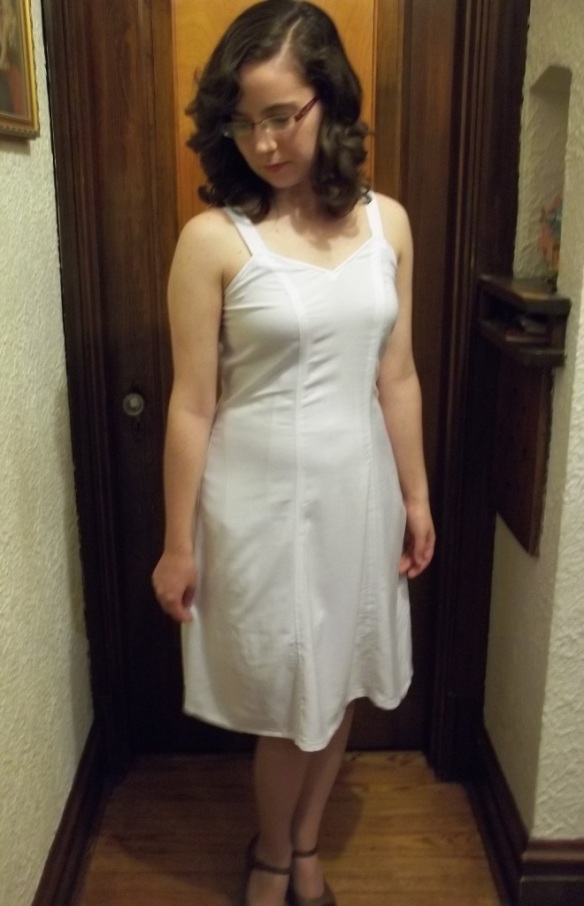 This is sort of part one of two blog posts, both connected to the same outfit based off of 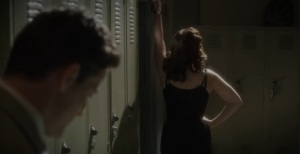 the same episode from the Marvel’s “Agent Carter” television, “The Iron Ceiling”, Season 1, Episode 5, aired on February 3, 2015. I’ll address at the end of the post about Episode 5 and the way my slip creation is connected to part two post. Inspiration aside, I ultimately made my slip because 1.) I needed it, 2.) I can’t find anything to buy like what I wanted, and 3.) I wanted to have an entire outfit, inside and out which I made and that will co-ordinate perfectly with my vintage as well as modern garments. Besides, it’s always fun to try new things and use up leftover remnants laying in one’s stash bin, both applicable to my slip! 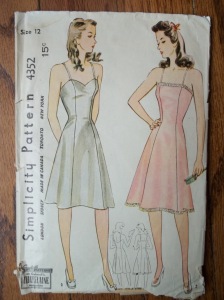 NOTIONS:  I had the thread, bias tape, twill tape ribbon, and zipper needed on hand already.

TIME TO COMPLETE:  Not long at all…this creation was effortless. In all, I spent maybe 4 hours in total and it was finished on April 18, 2015.

THE INSIDES:  The inner edges are left raw to do their own thing, merely stitched over. The top edge and bottom hem are covered by sewing down and folding in bias tape. 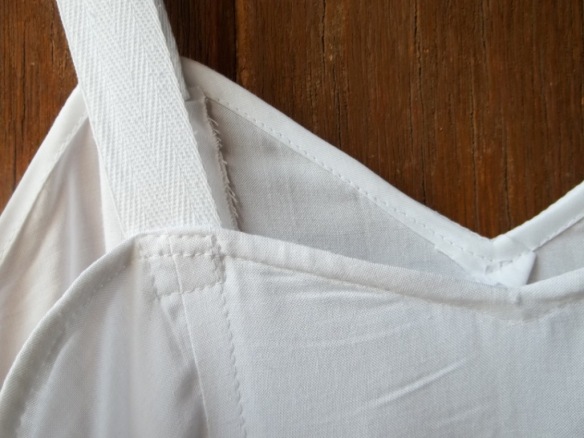 TOTAL COST:  around $5 (more or less, I don’t remember precisely) 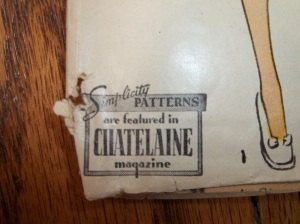 Now just to clarify a few things about the specifics of my pattern, I have not as yet found any record or picture of another version of Simplicity #4352 which is says “Made in Canada” like mine does. This combo must be rarer, but to be more unusual it also mentions in the bottom corner, “Simplicity Patterns are featured in Chatelaine Magazine.” I’m not sure what that magazine was exactly besides a woman’s periodical of the time, but I’m thinking that my find is a bit special. This is my first WWII Canadian pattern.

From what I can tell from the American versions of this slip pattern, and from the styling of the garment together with the envelope lettering, all point to the fact that it is highly probable to be from year 1942. However, this particular design seems to have been reprinted for a few years during WWII (highly common), so if it’s not from ’42 precisely, the pattern would be no later than 1945. Out of a dislike to be vague and a will to be decisive, I’m sticking with assigning to my slip the first year it seemed to surface – 1942. 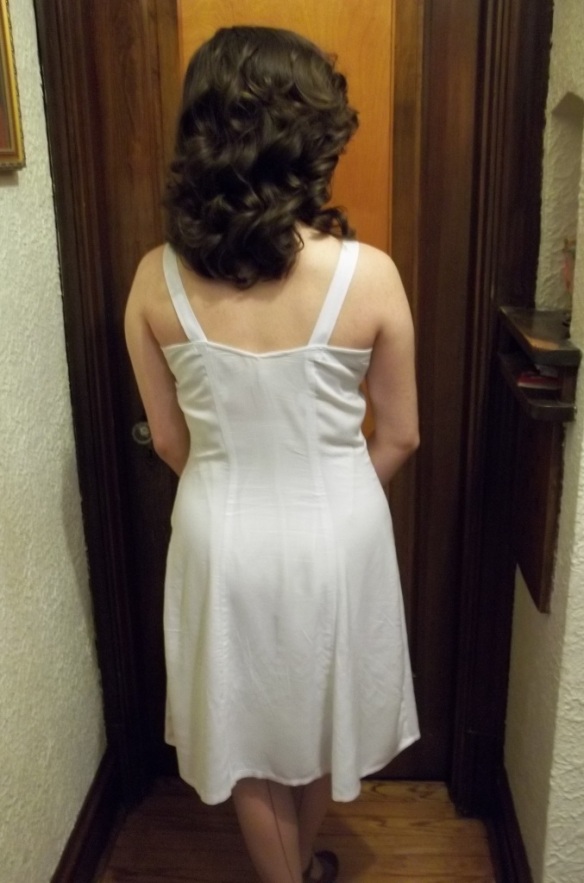 The back guide for the needed fabric amount showed much more than I really needed. As you can see in the facts, I only made this out of one yard. There were a few things that effected this frugality of fabric. The width of the rayon I used was 60 inches wide (helping to fit more of the pattern pieces on the layout), and I did shorten up the slip to be just below my knees, but it was the way I folded the fabric at the layout stage – with the selvedge edges in at the middle to make two fold lengths – which really helped get the most out of a small amount. The pattern pieces were really long and skinny because of the princess seaming, so I also oppositely staggered the pieces…meaning I would place one with the large end towards the left, the next piece towards the right, then back to the left for the bigger end of the next. Extreme, I know, and it’s not that I don’t use my scraps, but a 1940’s thrifty WWII woman would have had the same mindset. Yup, this slip was another exercise in the art of getting the most of every possible free space on a cut of fabric with no compromises on the grain line. This economy at the cutting stage adds to my overall satisfaction/pride with my finished project.

I did have to lightly grade up in size for the slip, and I added it in two increments: at the sid 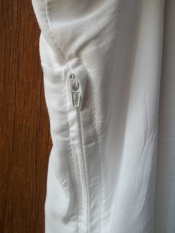 e seams and at the centers in front and back, by moving the pattern away the necessary amount from the fold edge. The long princess seam down the center of the bust was sewn with a seam allowance slightly smaller by ¼ inch to shape the slip better for me. All the long seams were top stitched down for a smooth look under clothes without relying on constant ironing to keep things in place. The side zipper is quite necessary to keep the slip’s close streamlined fit, nipping in the waist, and amazingly not really a problem to me under other skirts, tops, or dresses with side zippers, too.

Using rayon challis for making a slip was the best thing ever! I absolutely love, love, love rayon – its hand, its wear, its ease to work with, and its historical accuracy – so it was a matter of course for me to turn to using it. However, you know that annoying polyester fabric that seems so beautiful and drapey on the bolt until you actually wear it and it turns into a static mess, clinging to your every move unless you spray it to death with static cling or line it with another fabric? Whew. Yeah, it’s a gross and annoying problem for sewers. Well, wearing a non-static, natural fiber rayon slip 100% completely miraculously solves that former curse of polyester. Hallelujah! So simple, I don’t know why I haven’t come across this solution earlier. Cotton would be anti-static, as well, and silk would, too, but it’s expensive and not used during the 1940’s. Rayon flows well, even with similar fabrics like cottons, woolen, and even other rayon, too.

I’m not sure what would be 40’s appropriate for the straps, but I used what was on hand – twill tape ribbon. My mind considered making the strap adjustable, but in the end, they were just stitched down. Hey…I am my own tailor, designer, do-it-all, so if the straps need to be fixed I’ll just unpick and re-fix. 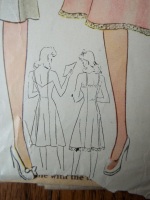 Check out that small detail line drawing close-up! It has such a tiny spot on the cover, I had to zoom in for you. Now you can see the two different versions to be made. I chose the drop neck version because open necklines will work with it better, and, besides, it’s just so darn pretty with the dip in the back neckline as well! I do love the straight neck version, with all the lace on it, but it’s not so practical for me. The cover is just all over appealing to me, from the loose pigtails to the bow-topped heels.

Now for an inspiration explanation. In the beginning of “Agent Carter” “The Iron Ceiling” Episode, Peggy is wearing a deep teal, white pin-striped masculine-inspired shirt dress. Once she gets the o.k. to fly off on a secret mission, she proceeds to change at the men’s locker –the only spot available – into a 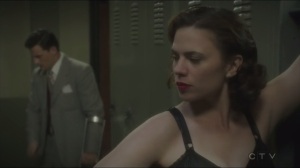 commando, military outfit. Here we see a brief, fleeting glimpse of her under slip in an uncomfortable but hilarious situation for her co-workers. I do own a vintage 1940’s black rayon slip, very much like the one seen briefly on Peggy in “Agent Carter”, and the straps are very skinny and adjustable, with remarkable shaping. However, I wanted to make her outfit from “The Iron Ceiling” Episode, and I intended to sew the whole this myself…both slip and dress. Thus, starting from the inside out like it mentioned earlier, part one (this post) is about my slip, and part two will be my copy of what Agent Carter wore over it – a pinstriped shirt dress.