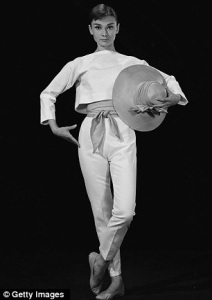 The year 1953 was an important year for the popularity of the British actress Audrey Hepburn with the release of the movie “Roman Holiday”; 1953 was also the first year the “Utility Scheme” of clothing rationing was over for post-World War II Britain. Complete rationing wasn’t over in Britain until July 4, 1954, and the fashion industry was rearing and ready to go with a new trends, among which was the popular Audrey Hepburn’s style of casual chic – skinny leg cropped “cigarette pants” and flat loafers or ballet shoes. Skinny tops or cropped tops were often worn from the waist up with this style of dressing from the waist down. Large gingham was also branching out beyond homespun wear and tablecloths, seeing new popularity starting in 1950 and lasting through the decade. Therefore, I have re-fashioned a modern blouse into something hailing back from the early to mid-50’s to honor Audrey’s classic, effortless look.

Just to clarify, my gingham blouse is the only part of my outfit that is made. The skinny fit black cropped pants are mine from about 20 years ago, bought RTW and still fitting, yahoo! The turquoise hat seen in some of my pictures is an authentic vintage 50’s item, in beautiful felt and with a velvet brim. Please notice my necklace of a charm-sized pair of golden scissors – it’s my new favorite silent “spokesperson” for my love of sewing!

FABRIC:  One “Mossimo” brand gingham tunic shirt, bought maybe 10 years ago from our local big box store “Target” in a girl’s size XL (extra-large). Its’ fabric is a nice and wrinkle-free 100% cotton. Underside the collar is a basic black poly/cotton blend broadcloth, made from scraps on hand. 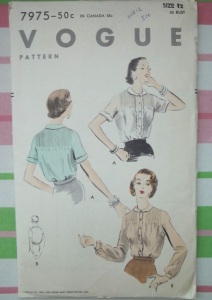 NOTIONS:  I only needed thread…always kept on hand.

THE INSIDES:  Nothing special…raw and loose.

TOTAL COST:  Zero! A re-fashion made with everything which was on hand is the best new item because it is free and oh-so-sensible!

As I think I’ve mentioned before, there are indeed forgotten and untouched spots in the racks of clothing in our house. I’m pretty sure most of us all have this same condition. In my case, I seem to always gravitate to the wearing the garments I made or at least tailored and altered (for good reasons which you can probably figure out), rather than wearing any RTW store bought items. Thus, sometimes when I want something new to wear, rather than turning to my fabric bins I attack those uninteresting store bought items in my wardrobe to turn them into something I actually do want to wear. I figure the more I keep up this practice, I am going to have a complete wardrobe of all handmade garments I do want to wear. Not that it’s a bad thing to donate, but I am keeping out more clutter from the overloaded amount of unwanted and unloved clothes besides merely being thrifty. I have something on hand already…so I’ll enjoy the challenge of transforming it into something which fits and looks better than the original. It’s like shopping without spending anything! “Make do and mend” ideal isn’t just for the 1940’s era. If more of us used our existing sewing skills to not just make but also tailor and transform our existing wardrobe items, I think more happiness with what we have and more satisfaction with our personal style would prevail. 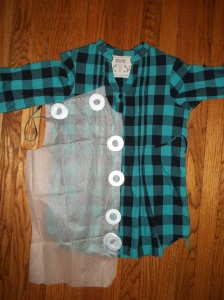 In any case, the original blouse no longer fit my shoulders too well and I wasn’t happy with the overall look. Besides, its proportions were all off. My first thought was the one I went with for my re-fashion – to take advantage of the multitude of pin-tucks. I remembered I had a special pattern with some awesome pin-tuck details from the 1950’s, which was the era I wanted to go with the “new” blouse anyway. Bingo! It’s like figuring in that the pin-tucking part was already done for me and it was perfectly similar to the pattern the way I laid it out.

I made the new shoulder line begin at the old bust line, thereby cutting off half of the pin-tucks on the chest. The original pattern was designed for a separate button placket to be sewn on, just like on my original blouse, so I figured that into the pattern as already done and left it untouched as it was. An existing button was lined up at about 5/8 inches down (my chosen seam allowance for this project) from the center front so I have a closure at the very top of the finished neckline.

The back lines of the new blouse needed to be lined up with the front, and this was quite challenging. You see, both front and back I wanted (actually needed) aligned because I was keeping the existing side seams untouched. The shoulder seam and collar of the new back panel were so much higher than the front for fitting purposes, but thankfully, I was left with just enough of the old horizontal back shoulder length to use for the collar.

Fitting in a new armscye was tricky because I also was keeping the sleeve seam untouched. What I did was roughly measure around the length of the armscye on the sleeve to get an idea of the finished circumference. Then I laid out a measuring tape to the same circumference from front shoulder seam down and around up to the back shoulder seam, marking the path of the u-shaped dip with chalk. Next the shoulder seams were sewn together and the sleeve then set in. I know this might not be the best or most professional way to do this, but you know it worked and provided me with a perfect fitting shoulder. I do a good amount of what I do in sewing by some sort of instinct, naturally knowing in some 6th sense how something will fit and/or work. What will work for me might or might not work as well for others, but at least I can explain my process to you. Getting how you did something “out there” is always good for others to know, whether it worked out in the end or not, for knowing and trying is part of learning in the sewing experience. 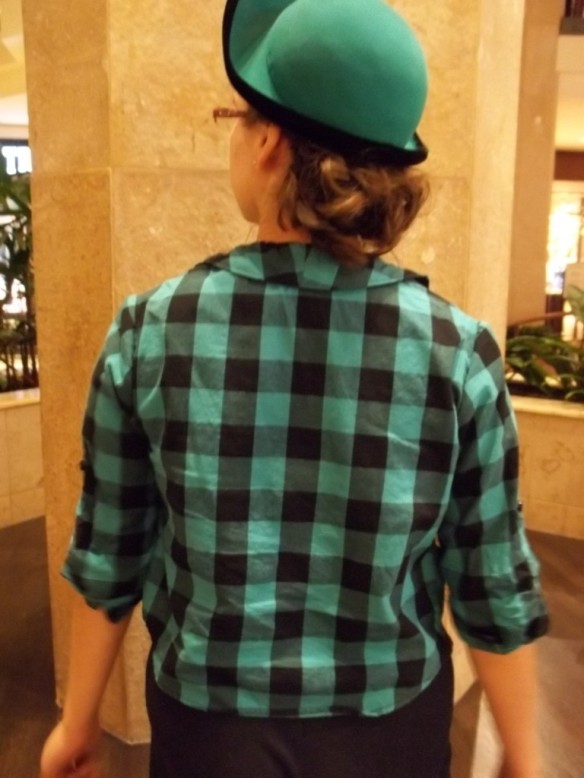 Pin-tucks leftover from the front of the blouse were included in the front corners of the collar closest to the center. Black broadcloth is on the underside of the collar just out of necessity because there wasn’t enough original gingham for another collar, but this was no problem…a few scraps sufficed to cut out something so small. I left out interfacing the collar because I wanted to keep my blouse nice but easy and casual. Where the collar joins to the blouse, the seam is invisible because it’s hidden inside. It was sewn like many collars – one side is sewn to the blouse, the other side’s seam allowance is turned under and both top-stitched down “in-the-ditch” for a flawless finish. The little notch in the pattern’s collar design was rather hard to get sharp enough as I would have liked and, even if I don’t make this pattern again (unlikely), personally I’d like to try like this collar again, if only to redo it. I think it needs to be re-drawn into a more dramatic arch to get a more dramatic notching, as it seemed to me that no amount of clipping close to the stitching can get a good inverse corner following the existing seam allowance. Nevertheless, this collar is subtle but still special, especially with the several rows of pin-tucks across the ends.

At first, I had planned on a contrast collar, either a lace one trimmed in bias tape or a broadcloth one, both in black. I still sort of wish I had gone with my first thought for a more modern, punk style blouse. However, I was left with enough extra self-fabric, so “Hey…I might as well match,” was in my mind. The matching collar sadly disguises to notched detail and the pin-tucking added. It also seems to make for blouse a bit more cute, and “baby-doll-ish” than I had expected, although making my new blouse more period accurate and more suited to being Audrey Hepburn’s signature “Gamine” style.

“Gamine” is a French word, according to Wikipedia, originally meaning “urchin, waif, or playful, naughty child”. It can be dated back to about 1840, but it wasn’t until the last 80 years it has come to be known according to its English meaning “a slim, often boyish, elegant, wide-eyed young woman who is, or is perceived to be, mischievous, teasing or sexually appealing”. Most of us know of the “Gamine” look of the 1920’s (flappers), but it really wasn’t until Audrey Hepburn’s popularity in the 1950’s when this term became more of something which conveyed a strong sense of style and chic. 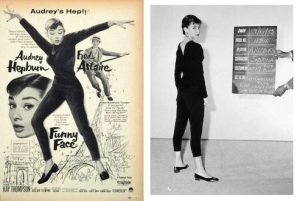 which she originally refused, especially in regards to the white socks, according to a firsthand movie tidbit from the Director which you can read here. Previous to “Funny Face”, this general style of body hugging bottoms and simple understated coordinates was launched by Audrey in the 1954 film “Sabrina”. Her flat shoes do a lot to keep her style sweet and classic versus heels (which would instantly create a pin-up, bombshell aura). Interestingly enough, the second actress which popularized flat shoes, Brigitte Bardot in the 1956 movie “And God Created Woman”, gave flat shoes a sort of “hot and sultry” look, so I suppose it depends somewhat on the wearer what ballet shoes can do to an outfit. Ballet flat shoes, or slippers, have been around for a very long time in some form or fashion, in old Roman times but especially in the 1600’s being worn for men and women alike until resurfacing again in the 20th century with Hollywood’s help. For myself, I’ll admit that with my tiny feet, I love wearing simple flats. I’ll also admit I am part tomboy, but not enough to fully pull off the “Gamine” look in this post’s pictures…at least I tried! It’s sort of like attempting a conflict of interests trying to be an individual while copying someone else, isn’t it? It’s fun, though.

Do you have a style icon that is incredibly interesting to you? Have you carried over that particular style in your clothing and/or sewing?