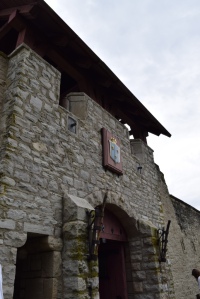 This past weekend, our family made our annual visit to the town of Prairie du Rocher, Illinois (U.S.A.) for their 18th century and early 19th century re-enactment at the historic Fortress of St. Anne De Chartres. It was a lovely day for the event, however a week of rainy days as well as a few showers the day itself made the flood plain that the fort is on more of a muddy marsh.  Luckily, we remembered to take our pictures soon after we arrived before our shoes, socks, and my skirt hem were soaked and caked (literally) in mud…yuk!  So much for my lovely suede shoes!  Hearing the fife and drum music made it all worthwhile.

Last year (post here) I went as an early 19th century lady, but this year we all were colonials, 1770 to 1780.  I did a good amount of sewing (and research) to my ensemble as well as for my son’s. Now that our son is old enough to remember and enjoy events like this, I took this opportunity to start him off fully participating with us.  He can always wear modern clothes…not too often will he get to “dress up” with us for a good reason, with somewhere to go!  He did get to wear my old tricorne hat from when I was his age.

I’ve been doing re-enacting since I was 10, and every year, every time I attend an event I learn more and integrate that into my outfit.  Well, I know I’m lacking in stays to bind myself in, and our little man could use a vest.  However, this time I took the week before to lend some much needed finishing touches to my ensemble to get it close to how I would like it (more authentic).  It was also high time for me to address my hat, giving it a new look (more down later). 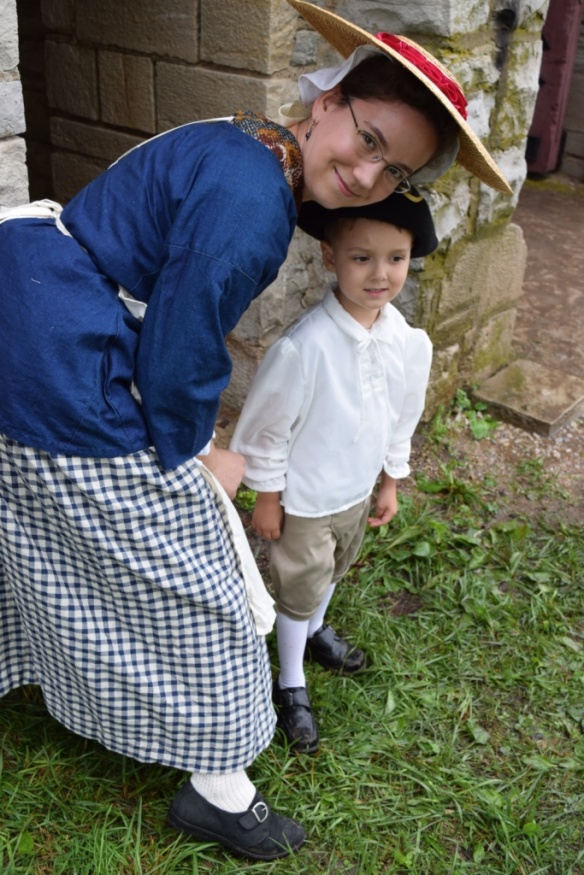 Now, my short-gown is a nice working class fitted jacket in a lovely nubby raw linen.  It is simple and unlined, and not made by me but sewn by an acquaintance of ours from the “Marquette Trading Company”, as is my under chemise.  The jacket came without any closures or ornament, which I liked so as to customize to our taste and suit the rest of the outfit.  I hand-sewed in hook-and-eye tape into the front center closure, basing it off of this original from the MET museum.  Pinning the jacket front closed might be accurate, too, but I get poked enough when sewing, and if the Met has an original jacket with hook-and-eyes down the front…I’m all for easy!  As a final touch, I would like to add some interest to the sleeve ends, like a loop and button to pull it up to a V-point at the inner elbow (maybe next year). 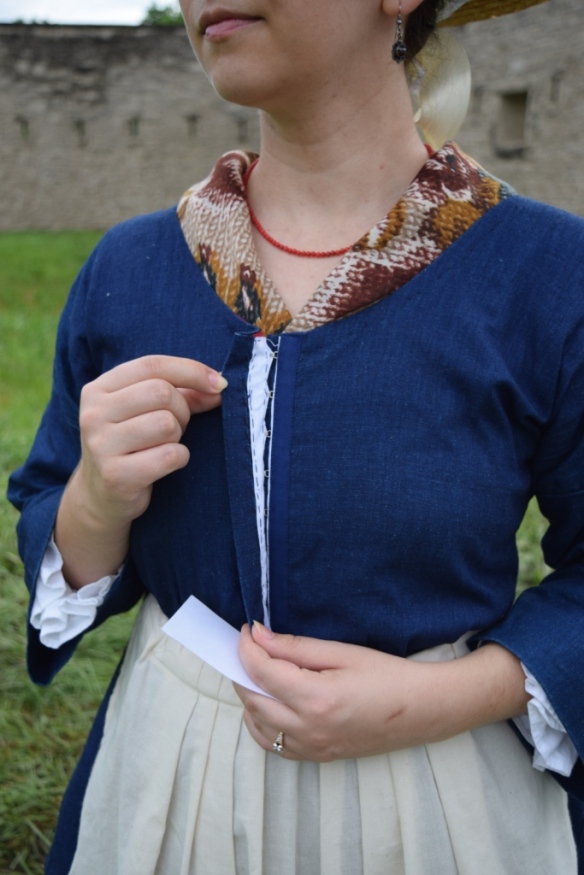 I made the rest of my outfit using raw, nubby, muslin cotton.  The skirt is a simple one made maybe 7 to 10 years back– just a few yards of fabric uber gathered.  I probably could have shortened it even more to show the proper amount of shoe/ankle, but my skirt was wet and therefore heavy and kind of dragging down a bit.  The apron is recently made and is also simple – just one yard of material with half the pleats ¾ inch and the others ½ inch.  My necklace is hand strung coral beads finished with sterling parts.

Yes, I didn’t forget the hat!  When I was a teenager I bought this straw hat blank and decorated it with a lace neck jabot and some nice plastic flowers.  While it was a nice attempt, the hat’s embellishment wasn’t really authentic so I did look around and make something closer to how it should be for the era.  I used a modern ribbon (sadly yes, but this was a last minute fix) but it looks so much better than what I had and I had fun sewing it!  The ribbon was widely box pleated then sewed through the center into the wedge of the crown and brim.  A wide ivory ribbon from underneath keeps the hat on my head – you just can’t see it because it blends in with my linen head covering cap underneath on my hair. 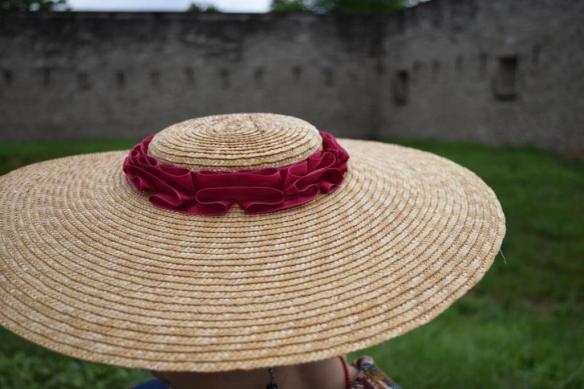 My scarf is modern, yes, and in a rayon, but I think it works.  “The Dreamstress” has a terminology post on her blog about Ikat prints and they were quite popular and used in many different ways during this time period (look at the 1755–65 chiné gown from the MET).  It seems they were a bit of a French mode and a luxury.  I’d like to think for an American colonial to wear Ikat might be seemingly associated with the country’s independent ideals of that time, so I think it quite symbolic for my outfit. 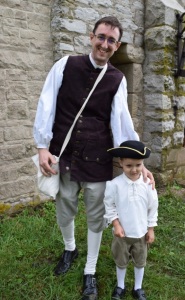 I rather decided at the last minute to make our son’s clothes so I had to do a bit of research and made do with what I had.  Luckily, I already had some cotton batiste on hand to use for the shirt.  Mostly I used my husband’s shirt as my guide and made the best mini version I could.  For a start, I used a modern but vintage year 1953 pattern as a rough base to cut out a simple 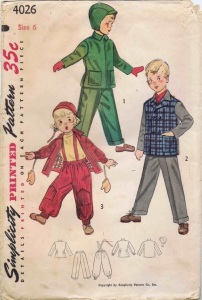 tunic, cutting the jacket pattern pieces (front and back) on the fold and adding in a front neckline with a facing.  Then I used the sleeve pieces to the jacket as my guide, using the extra length to gather in the ends like cuffs with elastic thread.  The shoulder seams are off the shoulder like they should be but I did want the shirt to be roomy so he’ll get more than one wearing out of it.  I pleated in the center outward sleeve tops, which turned out well except I need to take out more of the cap poufiness.  Then I drafted my own collar and added skinny ties.  Voila!

My son’s breeches are something – just good enough for the day.  I really made these with no pattern whatsoever and completely self-drafted them using a pair of my hubby’s unwanted old cotton khaki pants.  They have good features – a mock front fly flap, a back gusset closure, a wide waistband, and pleated in knee cuffs.  I just wish I had made them longer and had buttons for them, too.  Poor little guy – other re-enactors were getting a kick out of him because he walked everywhere with one hand holding up his britches because he had serious droopy drawers!

I’m proud I was able to get this close in one day’s worth of a few hours with no pattern yet I’m frustrated because they were so lacking.  I’ll do better next pair – be sure of it.  However, boy 18th century patterns are hard to come by!  I found one at “Jas. Townsend and Sons, Inc.” and more at “Patterns of Time”.  Any suggestions as to other good sources for children’s 1700’s patterns or what to look for would be appreciated. 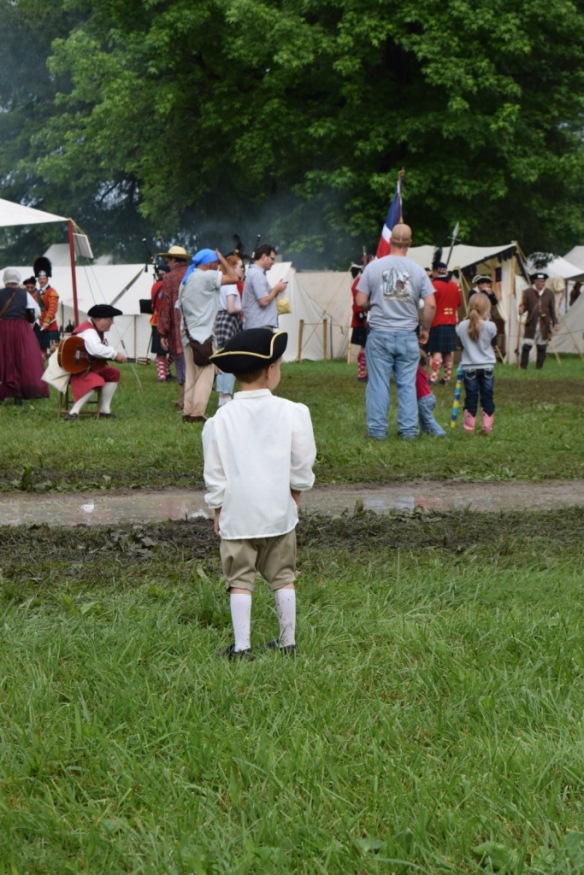 It is a refreshing palate cleanser to break away from my “normal” sewing of the 20th century and dive into other past decades and centuries.  Now I have the gumption do a historical project.  I did pull out my Regency patterns to plan a new frock or maybe I’ll pick up some of my Gilded era, Titanic era, and Civil War projects which need to be finished!  We’ll see.  Next, I have to find more re-enacting events to attend…