Our family’s annual weekend event of 18th century re-enacting has come and gone by as of the weekend before, but I added some advancements and additions to our outfits worthy to share.  My set is barely different – I wore a lightweight boned vest-style corset underneath this time and remembered my embroidered pocket.  Hubby’s outfit is pretty much the same as last year too, except this time he remembered to wear the tricorne hat I made oh so many years back. The main addition this year is my creation of a vest, with some re-fashioned pants, worn by our little man so he could look like a half-size colonial gentleman.  As I did last year for his shirt (which he thankfully still fit into this year), the rest of the pieces you’ll see for our son where whipped up by me in one afternoon, using only scraps of what was on hand.  I am so proud of him in this!  Time for an old-fashioned family photo. 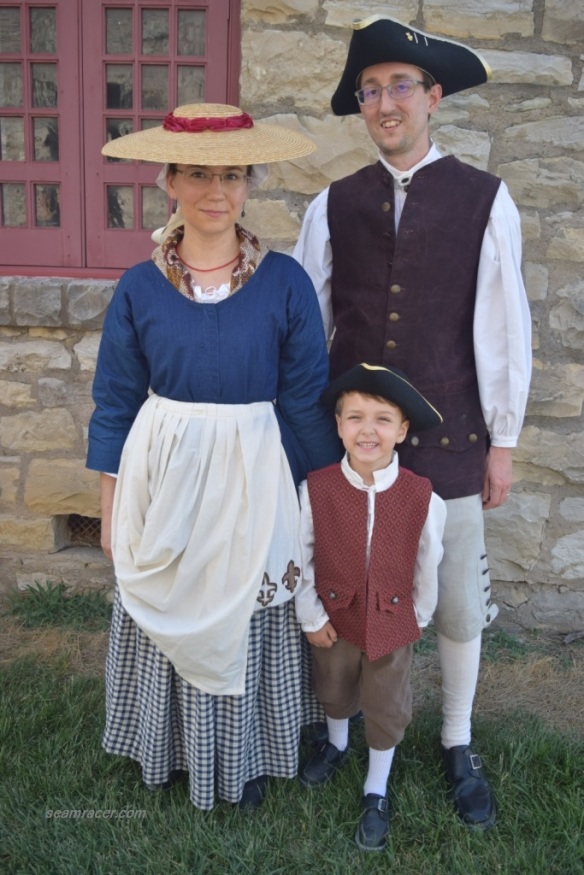 It was a lovely day, and happily a dry one, too, but a tad on the warm side for all the layers 18th century re-enacting requires.  As happy as my son is to wear what mommy makes, he was almost too warm to appreciate it as much as he might have otherwise.  Nevertheless, once he saw the fife and drummers and the bagpipe playing Scottish Highlanders, he forgot to worry about anything else!  Please visit my Instagram page to see some video clips of the wonderful Grand Parade at the end of the day.

I know my hubby’s waistcoat is more working class in its heavy canvas, but we had extra cotton tapestry, nice and thick, on hand for seat cushion covers.  Why not go dressy with my son’s vest if I can?  He does look so good being spiffy! 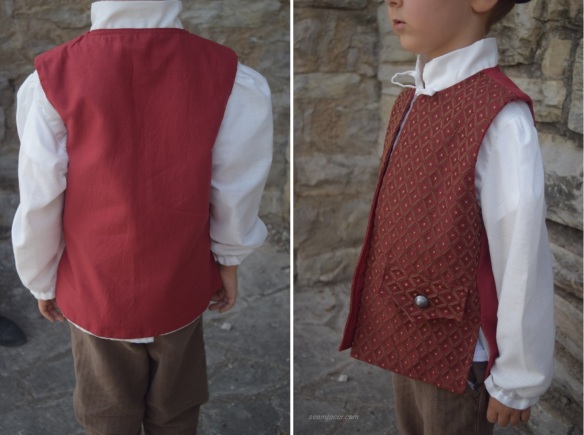 Basically, I roughly drafted our son’s vest off of an existing modern vest and tweaked the cut to make it closer to my husband’s vest.  Looking at the pattern cover image of this boy’s set from Jas Townsends helped me immensely, too.  I cut the fronts so they would have a full coverage enough to overlap down the center, with the overall vest having a long past the hips length.  The vest is backed in Kona cotton and fully lined so a double 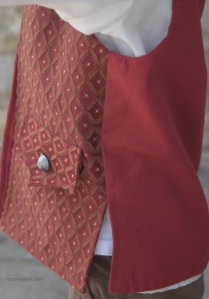 was then cut off of the tapestry pieces, as well. After the shoulders and half of the side seams were sewn on both lining and tapestry, I sewed the entire outer edges together (right sides in) halfway up at the side seams for the vents, and leaving a hole at the center back bottom to turn it inside out.  Then the raw armhole edges were turned in and I hand sewed the edges together.  This ‘lining-used-as-a-whole-body-facing’ makes for such a pristine and clean finished look.

I self-drafted the pocket flaps, lined them as for the body of the vest, and sewed them down without having real working storage available there…only confusing to my son.  Well, this was a quickie project and I’m not doing welt openings again anytime soon unless I have to.  I didn’t even bother to do buttons and buttonholes all the way down like I really would have preferred, only sewing two pewter buttons on the pocket flaps. 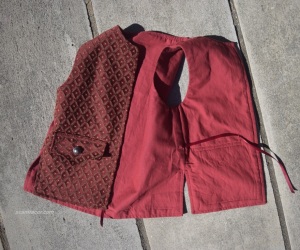 Rather than button closing front, I opted for a simple internal ribbon tie to keep the vest front closed.  Am I sneaky cheating on a historical garment?  Probably.  However, doing so on a child’s garment is reasonable to me.  If it was for me, that would be another story.  At this point in his life, he grows out of things so quickly.  I wanted something believably accurate (historical-wise), good looking, simple to make, easy to dress our son in, and smartly economical by using up stuff on hand.  I think I found what I was looking for here, and boy do I think it looks awesome on him.  I’m hoping I made it generous enough so that he can get another year’s wear out of the vest.

The breeches started out as some modern, heavy twill pants which were rather high-water on him.  I merely turned the hem up and under into the body of the pants, tacked that in place, then made a tuck at the outer end of the new ‘hem’ to taper in under the knees.  This is again not as authentic as I would like, but easy and passable.  These breeches even make for nice looking 1930’s knickers.  Luckily, the long vest covered the modern zipper fly to his pants!

I’m looking forward to fine tuning these outfits each event, especially those for our son since boy’s historical clothes are hard to come by.  Until next time!