My son sees what I do when it comes to creating and sewing.  Happily for me, he seems to pretty well understand and appreciate it…especially when he becomes the recipient!  He is enthralled and absolutely fascinated by anything that “goes” – planes, trains, and automobiles – so that it gets naturally chosen for him, as if on default.  But not any old print will do.  He likes emergency vehicles especially well and fast sports cars…this second one makes him more like a mini me!  Thus, every so often we come across a printed fabric that makes him particularly happy.  Sometimes he finds the fabrics and sometimes I find them…he does enjoy fabric stores!  Then, it is fun to pair me and my 5 year old up to find what to make with it!  Here’s some of what I have made from the most recent fabric finds which have tickled my son’s fancy.

Now that he is a bit older and no longer a baby, life with him includes more customizing to his age and paying attention to his individuality.  This includes updating his room, too!  So I’ve made him some novelty print ‘race car pets’ curtains that make him giggle and a Disney “Cars” movie flannel pillow cover which he uses every night.  Lastly, I’ve sewed a “Things that go” print shirt which he just loves wearing.  I am mostly proud of the shirt, for several reasons I’ll expound on later, although I did find the curtains to be an interesting learning experience, as I have not made any real home decorating items before.  The best part?  I think I get ‘awesome mama points’ from him for making this stuff – score!

FABRIC:  all are 100% cotton – the curtains and his shirt are quilting prints and the pillow cover is a brushed flannel.

PATTERNS:  The pillow cover and the curtains were self-drafted, but the shirt comes from a year 1975 McCall’s #4741

NOTIONS:  I needed lots of thread for all of this (of course), but I also used scraps of interfacing from on hand and some specialty buttons.

TIME TO COMPLETE:  The curtains and the pillow cover was made in several hours’ time awhile back for my son’s previous birthday.  The shirt was made in 4 hours and finished on July 27, 2017.

THE INSIDES:  The little guy’s shirt has fun, random colors of bias tape finishing the inside.  A few seams are merely edge stitched, but the grown-up style facing makes this a very nice shirt.

TOTAL COST:  The curtain Fabric is a M’Liss brand “Traveling with Pets” series, bought from the now defunct Hancock Fabrics back in 2015.  I think I paid no more than $25 for the curtain fabrics, including the contrast remnant.  The pillow cover fabric was bought at Jo Ann’s fabric for a few dollars.  The shirt fabric was a recent ¾ of a yard remnant bought from Jo Ann’s, too, for about $5 and the buttons were on clearance for only 94 cents.

The mathematics I used to draft the curtains became a bit more challenging than drafting garments or purses and belts because it was on such a big scale, but also because I barely had enough fabric to make work.  The same “close call” happened for my son’s shirt – I was literally cutting the front, back, and sleeve with the pieces butting up against one another.  I don’t know why that always seems to happen – every time hubby or our son find a fabric that they really like, there is such a discrepancy of amount left for me to work with it makes my efforts at making something of it a bit more challenging.  The way this happens almost every time I’ve made a project for a family member is so odd!  Anyway, at least I’m putting to good use the last of what is left of these fabrics.

I have no idea if there is a “proper” way to make curtains, but the wide tabs to hang from the rod were relatively easy to make and have a bold yet relaxed, fun look to us.  The tabs and the curtain pulls might look like they are a basic yellow but they have a sneaky fun star print on them!  Nothing, however, can beat the hilarious cuteness of the print to the curtains themselves.  The “newness” of the curtains have worn off on our son by now, but for the first several weeks they were up he could be “caught” staring at them with a look that belies the proof of an inspired imagination and a smile which is between laughing and just plain happy.  After all, we are a family that loves animals, especially dachshunds (look at the giant stuffed “Gertie the dachsie” on the sill), as well as fast cars, so even if I didn’t want to sew this fabric into curtains, I pretty much had to because these are perfectly catered to us!

For my son’s pillow cover, I made it very basic, practically because it was whipped overnight for my son’s birthday.  I probably should have, or at least could have put a zipper into one end, but the pillow cover ended up fitting so snugly over the pillow itself that I didn’t want to take it off so I just hand stitched the opening closed.  I figured correctly that the cover wouldn’t need to come off for it to survive a trip through the washer and dryer.  He sleeps either with this pillow or on it every night (so excuse the worn appearance), and even likes it enough to want to bring it sometimes for sleepovers at the grandparents. 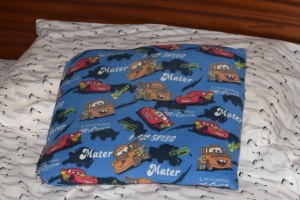 Many people asked him what Mommy gave him for his birthday, and many of those who do not sew had a weirdly disappointed reaction when he would excitedly tell them I made something, as if I didn’t give him anything at all.  It’s a shame to see this misunderstanding.  A handmade personally-catered gift can mean so much between the recipient and the maker!

Now to get on to the best part – the shirt!  This is very special for me to sew for him mostly because of the family connections which bring things full circle.  The pattern I used is one that I had given to me by my mother-in law when we were first married.  It is one that she had from her stash.  She herself used this very pattern to make my husband a shirt when he was 5 years old, just like our son is now.  She even had the body measurements written on the pattern for when my hubby was our son’s age, and amazingly the body measurements are all too similar.  Thus, I happily knew it was finally high time to whip up a second generation version of this family pattern.  We explained the connection to our son, but he seems to rather focus on the fun print and details.  Like father, like son…they are both very engineering, detailed oriented persons – our little tyke now has his own version of his dad’s McCall #4741 shirt.

I know the pattern is for nightwear.  However, this pattern deserved to be used (because of the family ties), it was going to fit him without any alterations, and it was dated to a year I’ve never sewn anything from before.  Besides all this, a shirt is relatively classic for a boy of any age.  Even a nightshirt, in vintage terms, can pass as street wear easily and a novelty print can make it too fun to just restrain it to indoor-only wear.

One of the most entertaining aspects to a fabric store is definitely the button section.  My son certainly agrees!  He frequently wants to pick out buttons, and although I have such a generous stash of vintage notions, every so often the need for a store bought item arises and our son happily rises to the occasion.  I will say he does do very, very well for a 5 year old when it comes to finding the perfect button for both some of my own projects as well as his own.  In other words, yes…he picked out his own buttons for this shirt.  They are large planes in his favorite color red.  They don’t exactly match with the ‘theme’ of the shirt, but those buttons give him a special sense of personal pride in the making of this shirt.  He himself had a part in it, and he hovered over my shoulder watching me sew the shirt, so yes he did have a big part in making this.  He likes to brag about this fact, too.  No store bought shirt could have such a bonding, empowering influence!

My title is partly borrowed from a series of 1910 to 1920’s era books which were popular with the youth back when motor vehicles were the newest and most exciting ‘thing’.  There was the earliest and most popular “Motor Boy” series, as well as the “Motor Rangers” and (for the young ladies) the “Motor Maids” which came a bit later.  These are two books currently in our collection and date to 1911.  I cannot think of a better attribute for my son at this point in his life than calling him a “motor boy”, too.  Even in our modern age, the fascination with things that carry us, transport us, and help us travel faster than our basic human capabilities still never fails to captivate.

I do have plans for some fabric on hand to make our son the matching robe, as well as those amazingly dated bell bottom pants which are also part of the pattern for his shirt.  Between his growing so fast, the amount of clothing for him we receive from the grandparents, and the low cost of many kids’ clothes, the greater percentage of his closet is store bought, unlike my own wardrobe I must admit.  I can only sew so much!!! However, the handful of items I do sew for our little man gives me a reason to make sure and keep up sewing items for him and getting him involved with what I do in a large part of my life.  Sewing for the younger crowd is its own wonderful inspiration.  We need the next generation to continue stitching, creating, and imaging in terms of fabric!

3 thoughts on “…Sewing for My Little Motor Boy”