Even today, women of India grow up with the name of the Rani, a warrior for Independence and queen of Jhansi (circa mid-1800s), as a household celebrity and role model, so I have heard.  Now that her inspiration has transcended the continent of India, thanks to some authentic representation through Hollywood (the likes of which has not been seen before), women of American can now also love the exciting historical story of Laxmi Bai.  “The Warrior Queen of Jhansi” movie, released November of 2019, is purported to be the very first United States movie starring an Indian woman as the main character, besides being produced, written, and directed by the mother-daughter team Swati Bhise and Devika Bhise. 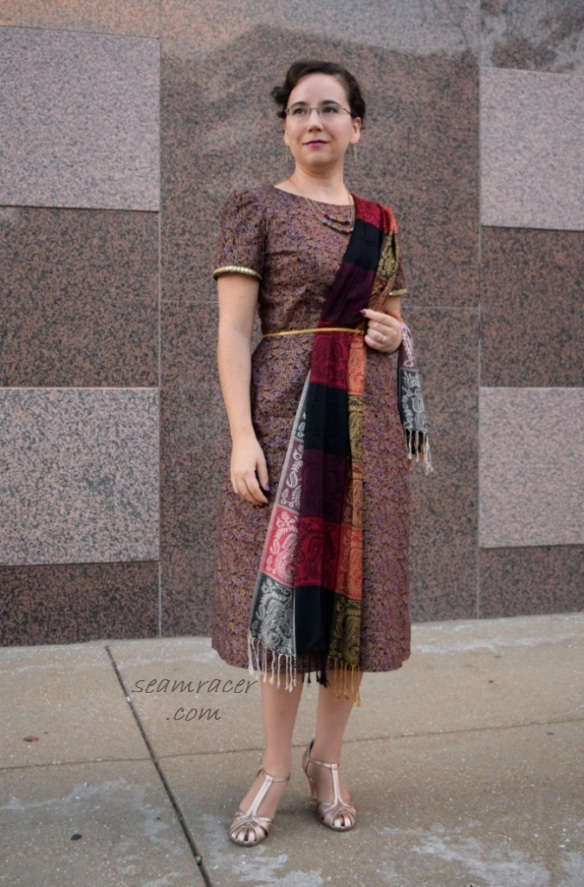 As the manifestation of finding a new personal hero, this vintage mid-60’s style dress is the visible result of me channeling my own inner “Spirit of the Rani” since I first found out about Queen Laxmi Bai a few months back.  This outfit mirrors both the traditional clothes of Maratha province of India, besides imitating the outfits worn by the leading lady in “The 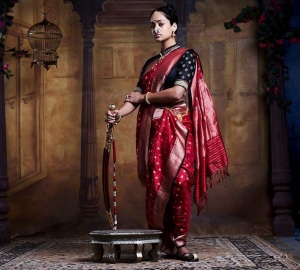 Warrior Queen of Jhansi” movie.  Now more than before, I am fully invested in continuing to add to my wardrobe of Indian inspired fashion (see my 1947 Independence Remembrance dress here and my 70’s inspired Sherwani jacket here).

I love the beautifully rich complexity that every Indian inspired outfit offers – a whole new aspect of their culture and history is opened up every time I dig deeper into the traditions of every different region.  I am in awe of the detailing and thought that goes into the practices and the fashions of India every time I sew something related to it.  This dress is not as culturally compelling as my last two Indian inspired garments and the ones I have plans for next, but the feelings behind it are just as strong as for the others…especially with the Rani as my muse! 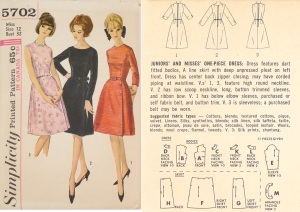 FABRIC:  a 100% rich-toned cotton print with gold foil accents; the bodice is fully lined in an all-cotton broadcloth

NOTIONS:  All of what I needed was on hand already – zipper, thread, seam tape, bias tape – but the authentic Indian trim which is on my sleeves was ordered from “Fibers to Fabric” on Etsy. 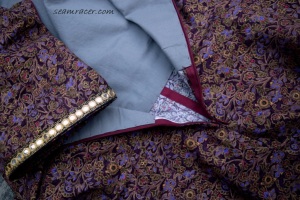 TIME TO COMPLETE:  The dress was made in about13 hours and finished just in time – November 13, 2019 – for us to see the movie on its premiere weekend for United States showings.

THE INSIDES:  all either cleanly bias bound or covered by the bodice lining

TOTAL COST:  The foil-printed cotton fabric is something I have been holding onto since the late 90s or early 2000’s.  It came from the now defunct Hancock Fabrics.  I always received the best deals from Hancock but after about 20 years in my stash, this fabric is as good as free to me and more than deserves to be seen and worn – finally!  My only cost was the lining cotton and the trim…$15 or less altogether. 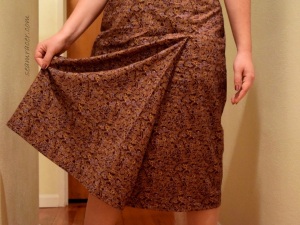 The actual design lines to this dress are deceptively simple.  It is basically a standard sheath dress with a few lovely tweaks for a very nice fit.  The neckline is a rounded boatneck, the skirt has a mock-wrap look with its deep-set asymmetric knife pleat, and the full back zipper makes this easy to get on.  It fit great right out of the envelope, after only slightly shortening the rather long bodice.  I left the length long for more elegant air.

I do believe it is the rich-looking, detailed print of the thick cotton I chose (look at all the colors in it!) as well as the proper ethnic accessories which add so much to my dress.  There is no sense making an Indian inspired dress without the proper attributes!  Except for my shoes, which are vintage-style Chelsea Crew brand, my vintage golden belt, and my hair comb, which I made myself, all else was bought from local stores who carry ethnic sourced items.  Although this is a modern merge of Indian traditions, I would be 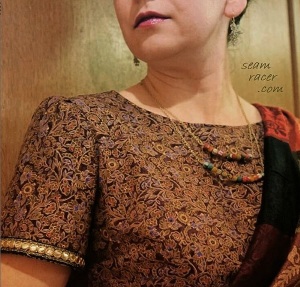 remiss to leave out a dupatta shawl.  This one is woven rayon from India.  My necklace is composed of beads made from recycled sari remnants and my earrings are blue agate beads – both handmade in India.  However, my prized and proper, true ethnic addition is the mirror-work trim sewn down to the sleeve hems of my dress.  This was ordered direct from India out of a shop that specializes in supplying traditional buttons, trims, as well as woven and natural dyed fabrics (Fibers to Fabric on Etsy). 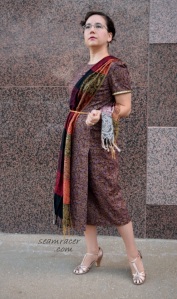 Looking back, Indian inspired fashions had seemed to explode in the global fashion scene in the 1950 era, especially so in the 1960s.  Sewing patterns (particularly ones idealized for border prints) which call for saris as suggested material and saris made into fashions according the mode of the day can be easily found popping up in vintage selling spheres today.  Sadly many such designs lack any sort of traditional approbation.  (See this Pinterest board of mine for some visual examples.)  These are great examples of the many ethnic influences which were prevailing in the Mid-Century Modern times.  I am wondering if the Indian influence of these decades past is due to something else besides a general outward-focused interest or desire for foreign inspiration, perhaps.  Maybe there was a steady influx of immigrants from India sharing their culture in America and elsewhere?  If so, was this maybe because of good visas abroad or because of some homeland political upheavals popping up in the decades following the 1947 Independence?  I have so many unanswered questions. 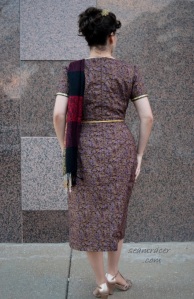 Either way, my dress follows the norm of such loosely influenced Mid-Century designs, with greater attribution coming from my accessories and idealism of the Rani.  Even the foiled cotton print is something which would have been very popular for the times as well, with fabric pioneers such as Alfred Shaheen bringing such a basic material up to a whole new level of classy with metallic accents and rich, vibrant colors and patterns.  Not everybody knows that old cotton prints in their pristine gloriousness can put contemporary versions to shame.  A cotton dress was by no means plain in the Mid-Century – I mean look at this vibrant Valentine’s Day dress I made of true vintage 50’s cotton!  This dress is only made of a newer version of an old style.  Yet, as I stated above in “The Facts”, the cotton I used for this Indian dress was edging dangerously close to becoming modern vintage in its own right, though – it has been in my stash for the last 20 years!  All the more reason I am so happy with my new dress! 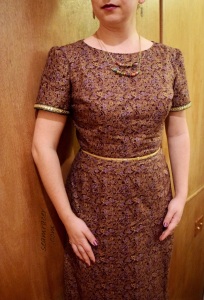 For someone trying to make something from practically most of the last century, finding a pattern that appeals to me from the year 1965 is still a will-o-wisp I cannot capture.  Nevertheless, this year 1964 project is a satisfying close-call.  After all, 1965 designs seem to be either quite plain or a mere repeat of the same styles I see in the years both before and after, such as this Pierre Cardin design, Vogue Paris Original no.1443 from 1965 (also with a pleated, mock-wrap style skirt to the dress).  I’m hoping the right year 1965 pattern will eventually fall into my lap, but in the meantime I’ll secretly be counting this dress as close enough to the middle of the 60’s.  There are other projects with a louder siren call to listen to!

I really did not see or plan for this project in my sewing plans queue, but was an easy make, an opportunity to learn more about my favorite foreign culture, a very good use of some lovely materials (if I do say so myself), and fulfilled my personal ‘need’ to honor the Rani at our viewing of such a wonderful film.  Many critical reviews are scathingly hard on it, but ignore them…the movie was beautiful. I cannot stress how important such historical 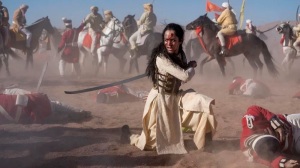 and ethnic representation like this is to have today.  Besides the inclusiveness this film affords, the historical fact that the Rani – a woman – was the first popular freedom fighter and one of the top icons for Indian nationalists is not something only one country should acclaim. She believed women were just as powerful, smart, and worthwhile as men in a time (1850s) and place when she was fighting every side of societal and cultural norms for those ideals, not to mention standing up for her homeland first in diplomatic relations then in valiant battles to free it from the grip of the East India Company. Please make an effort to see this film for yourself or at least learn about the wonderful life of Rani of Jhansi.

Happily, my Rani inspired dress has prompted some discussions and sharing of my limited knowledge about her to those who happened to compliment me on my outfit the night I wore it out.  Any woman with an independent mind, courageous will, compassionate heart, loving temper, and patriotic fire inside manifested outwardly is the “Spirit of the Rani” today.  Not to be reckoned with lightly, such a woman is a powerful force in the world of today.  When women believe in their worth and capabilities they can do whatever it takes to fulfill their destinies and bring any dream to life. 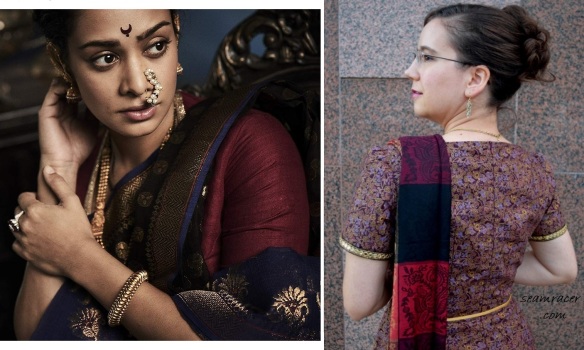 The Rani became more than a heroine, she became an idea.  When someone acts on an idea, anything can happen.  When the men around the Rani did not believe they had a chance of successful rebellion, she set up a formidable women’s corps to fight…which idea was also repeated during WWII with the ‘Rani of Jhansi regiment’ under Lakshmi Sahgal.  Let’s follow the Rani and act on those inspired ideas for the good of ourselves and others!  I started with only a dress, in this case