It was just Father’s Day weekend here in America…so it’s time for another one my infrequent but recurring posts on vintage menswear!  My husband’s birthday and Father’s Day are practically a month apart and so I annually take some time between the two dates to sew him a shirt.  This years’ gift was something completely new and different – both for me to work with and for him to wear.  It’s a 1960s era shirt made out of that easily recognizable, and cool-as-a-cucumber cotton we call seersucker.  I equate it to my giving him his own personal air-conditioning. 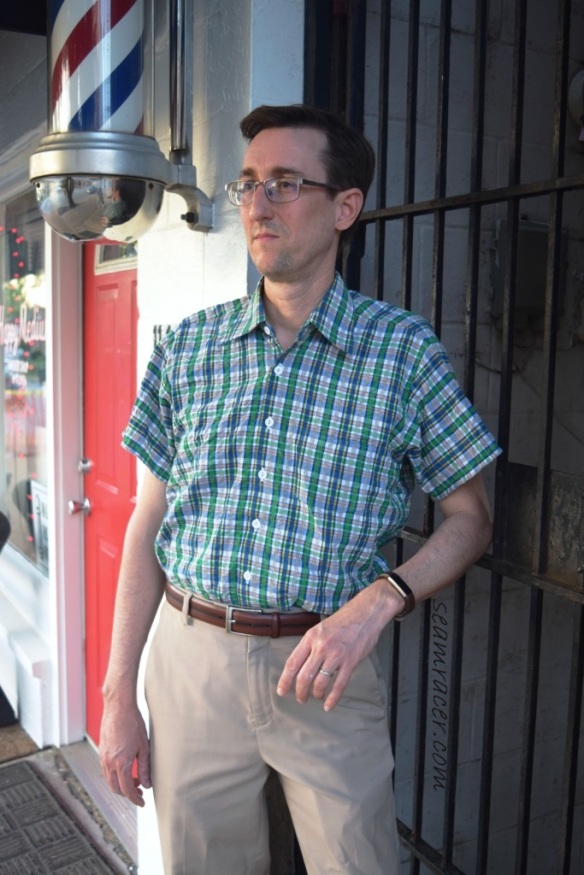 “Seersucker is the quintessential warm-weather fabric known for its crinkled texture and breezy quality. Seersucker’s texture creates a space between the skin and the fabric that helps improve heat dissipation and promotes air circulation” says Fabric.com.  Yet, “It is a low-profit, high-cost item because of its slow weaving speed” says Wikipedia, and so it is produced in much smaller quantities than other textiles.  Seersucker is woven in such a way that some threads bunch together – “slack-tension weave” – giving the fabric a wrinkled appearance in places…which also means ironing is not necessary (yay).  Many seersucker fabrics are striped (much like butchers’ or railroad workers’ “hickory stripes”), but I have had this shirt’s plaid seersucker in my fabric stash for well over a decade, so no wonder it is on the more unusual side! 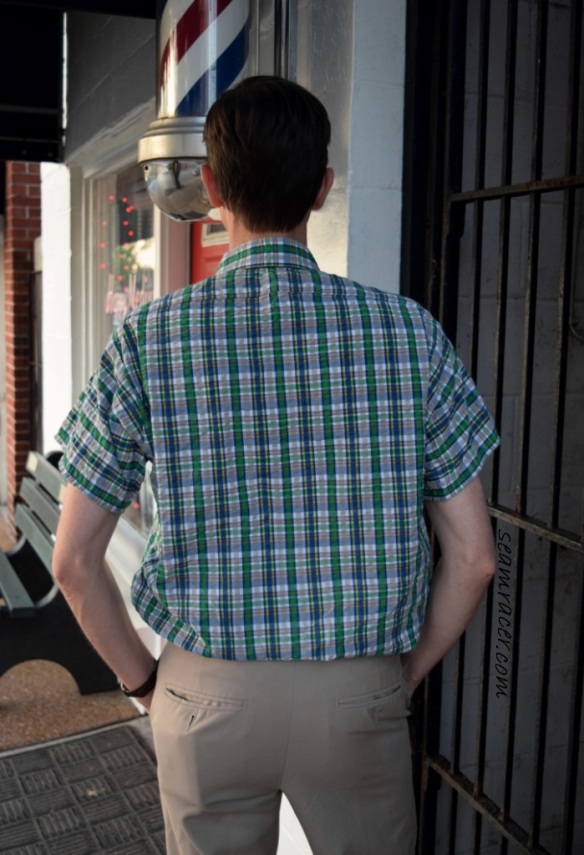 Now to explain my post’s title.  “Milk and sugar” is the translation of “shīroshakar”, a combo of Persian and Sanskrit, and the derivative to the word seersucker, which came into English from Hindi.  It calls to mind the smooth rippling of milk poured around lumpy sugar.  I love the picturesque richness of some words such as this!  This reminds me of the beauty of baking and how the ingredients take such differing appearances at every step.

Our picture of a WAVES summer uniform, United States Naval Reserve, circa 1942, from the exhibit “Making Mainbocher” exhibit in Chicago back in 2017.

NOTIONS:  Lots of thread, a bit of interfacing, and a few buttons 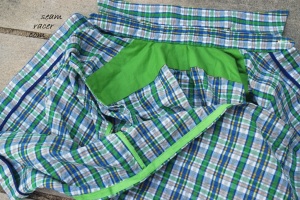 THE INSIDES:  The armscyes are French seamed but all else is cleanly bias bound.

TOTAL COST:  As this shirt project makes use of a fabric cut which I have been holding onto for at least a decade, I’m counting this as a free and worthwhile stash-busting project!

This shirt – as is often the case for the majority of vintage menswear from the 1950s and on – is not easily recognizable as originating from an older design.  Most of the time, I do believe that one would not guess the shirts I make and sew for him are vintage.  Mid-Century menswear often lacks standout features to date it to specific eras and generally stays pretty classic, so I feel it is the choice of fabric, the style of the pants to match, and the slight details which give such garments’ true age away.  This shirt (as is the case for many 50s and 60s men’s styles) has a boxy body and a very skinny shoulder panel which does not extend much into the main body.  I can tell this was a pattern meant to help make

a dress shirt with the separate collar stand and separate button placket (which I did not include) but I rather brought it down to a fairly casual level by choosing seersucker.  At this point in my husband’s professional life, casual yet dressy shirts are what he will be the most likely to wear on a regular basis, and so I wanted him to get the most use out of what I had sewn for him with my special fabric! 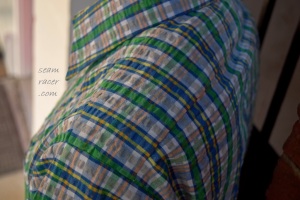 I know I tend to say this every time I post a shirt I’ve made for him, but it is the literal truth – I was so short on needed material for this project.  I had to cut some small ‘corners’ to make this work out successfully.  Yet, I was still somehow able to match the plaid…luckily so, because the analytical and perfectionist side of me would never tolerate anything else, otherwise!  I did not have any extra room for a separate button placket and the layout of the pattern pieces on my under 2 yard cut of fabric was conducive to only the shirt’s bare bones – slightly adapted – and one chest pocket (a must-have because we all love pockets, right?!).  The pattern design already had small turn-under edge down the front closure edges, so I doubled that to be a cut-on, self-fabric facing.  The separate button placket was an extra piece which was easy to sacrifice.  Granted, I did fully interface the newly drafted facing in lieu of stabilizing the add-on button placket, which I was not using.  The switch I made actually avoids breaking up the plaid and gives me less to stress over and match up.  He can’t miss what he should have had on his shirt when it is just as good without it!  Besides, a happy sewing wife is a happy life – don’t I have the phrase correct?

Making this shirt was a nice change of pace in my sewing and totally unique gift, besides.  I just don’t find seersucker in person anywhere anymore – RTW shopping or fabric stores – and I say it should be brought back.  I remember, as a young teen, my mom had bought me a plaid seersucker skirt I liked out of a catalog.  It was in a straight A-line shape, in a middy length, and printed with a plaid which had more blue and brown tones in place of the green and yellow as seen in his shirt (but otherwise a similar sized plaid).  I enjoyed how that skirt always looked good no matter what.  The print and the rough, puffy texture hides stains, and I could stuff it in a backpack to bring it with me as a change of clothes but still not look I was impromptu.  It was so lightweight to wear, it was almost imperceptible to feel it was on (weird to explain, but kind of like the weightlessness of bias cut silk without the cling).  If I did get sweaty, the cotton wicked it away without itself becoming damp.  If I could find that skirt again (I think it might be packed away somewhere downstairs) I would totally wear it or at least re-fashion it so I could!  So I can totally understand why this 60’s shirt is his newest favorite. 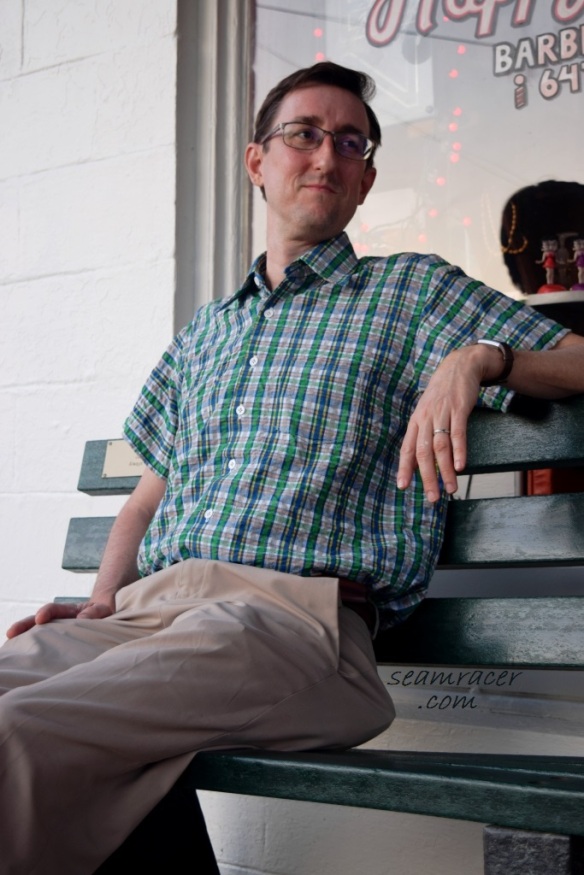 I still have not even posted the vintage shirt I made for his birthday-Father’s Day gift from last year!  My blogging proficiency doesn’t always keep up with the speed with which I crank out my sewing projects.  However, I can assure you, it’s another really good shirt which is yet another different and unique make.  So far, though, this post’s shirt is a definite high contender to the previous popularity of that one!  In a world when menswear is generally so very blah, I enjoy seeing him happy and bold enough to wear the singular things I make.  Sewing gifts for others is so amazing – to see someone else get to enjoy my handmade clothes just the same as I makes my gift not just about sharing a present.  It shares a special feeling.