Ah, yes – fabric scraps. I don’t know what they mean to you or if you even keep any, but my fabric scrap bins are a seamstress’ version of a gold mine. They silently scream out to me a siren’s call of the allure of an interesting project. Being able to use up every last inch of my fabric as well as re-incarnate something from past projects with a new makeover is a very fun and enticing duo which leaves me with a very happily successful feeling if my ideas turn out alright. This post’s dress is the product of one such idea born from the “call of the scrap bin”. 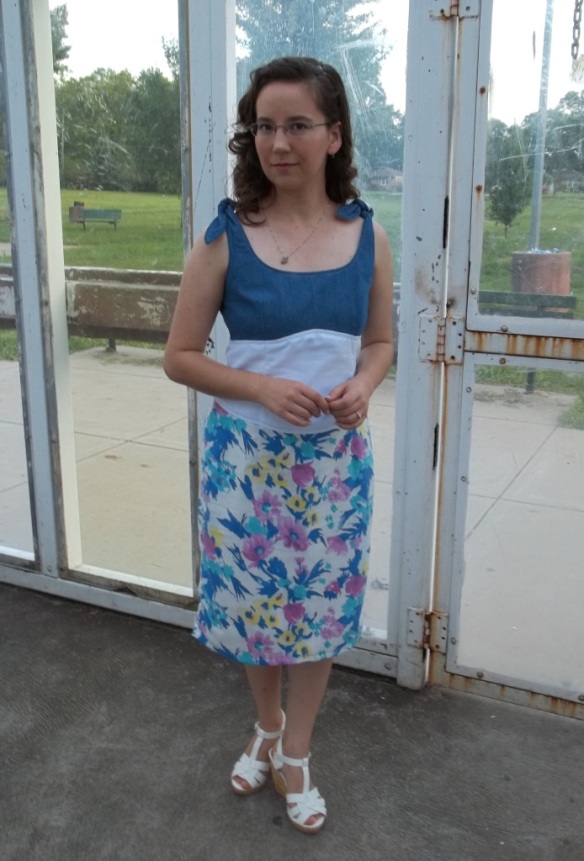 Our photo were taken at the local park’s handball court. Handball isn’t something I do. My hands take a beating enough from sewing and typing so much, but, when the courts are not in use, they did make for a clean and sporty backdrop as well as a nicely contained area out of the weather for our 3-year old to run back and forth to burn off extra energy!

FABRIC:  The fabric is a trio of fabrics with similar contents. The floral skirt portion is a linen-look polyester cotton blend, the middle is the same fabric just in a plain white color, and the top bra-like part is a 100% cotton denim. The floral skirt was made from one yard leftover from my 1961 Party Dress, the white linen-look is leftover from a 1940’s blouse (not posted yet), and the denim is from my 40’s arch waisted jeans.  My lining fabric is a 100% cotton bleached muslin from on hand. 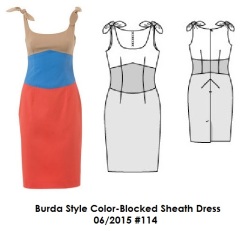 NOTIONS:  I only needed thread and a zipper, and I had these on hand already.

THE INSIDES:  Most all of the inner seams are covered by the lining, except for the skirt seams which are bias bound. 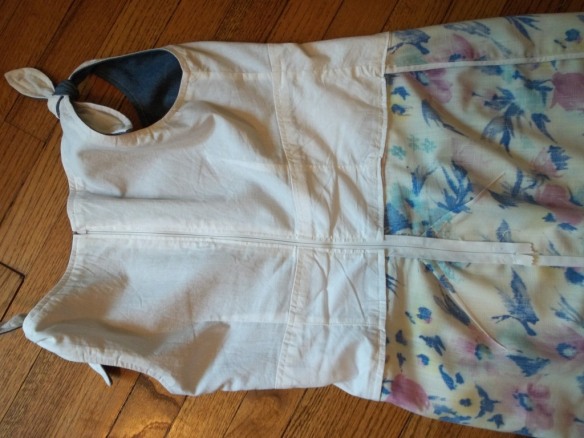 TOTAL COST:  Just about nothing is the monetary total when using scraps like I did here. Buying from scratch wouldn’t cost that much anyway because of the small amounts needed.

Similar to my Burda Double Layered Tops, this dress is another change of fabric types: its pattern called for material with stretch and I made it work for the opposite…a woven. Actually I made the mistake of not noticing the pattern was for knits until my fabrics were cut out and ready to be sewn together. To compensate for this I sewed all the vertical seams in small ¼ inch seams and doing so actually gave me just enough extra room for my dress to fit perfectly. My pattern, as I traced it, originally gave 5/8 inch seam allowances, which I kept on all the other horizontal seams. Besides the change of fabric from a knit to a woven, my only other change was to raise the neckline about an inch higher and spread this up halfway in the straps – it’s so much better for me this way!

Now, my dress is part of what Burda Style labels as a “master piece” to the June of 2015 release of patterns. Using the main design of this dress, there are a very close variations, with a few features added or subtracted to the pattern to make several differing styles, such as the “Bustier dress #112” and the “Corset dress #113”. My dress follows the pattern for the “Color Blocked Sheath Dress #114”, but as my project highlights the bust panel more than in the model picture, I still think of it as a “Bustier dress”, like #112.

My pattern had come from the European magazine issue, but a downloadable version is also available on the Burda Style website. Either way, the Burda patterns (for those readers who don’t know) need some assembly and tracing before being ready for layout on your chosen fabric. A scissor with a magnetic ruler guide helps immensely to quicken along the step to getting a finished pattern prepped. This is the stage where I pick out my size, tracing out only the size I need to use, including any grading and adding seam allowances. 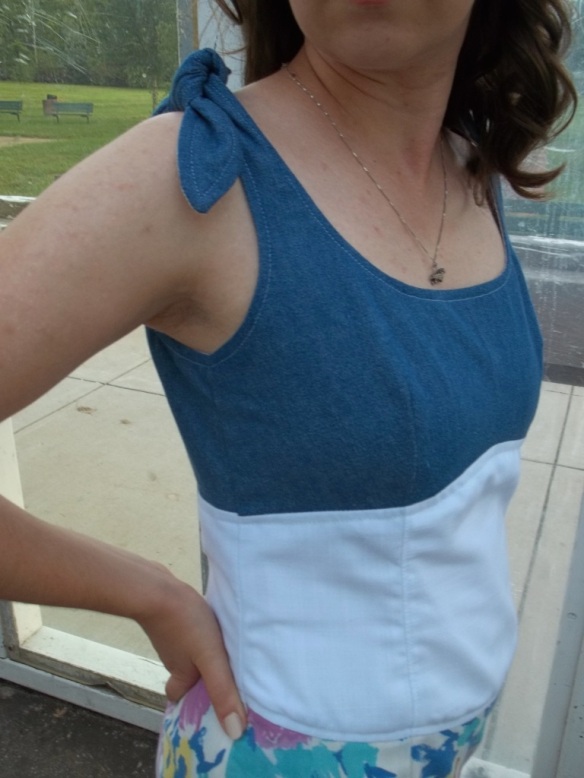 The pattern itself was actually pretty easy, just a tad tricky and time consuming. The tricky part comes from two parts: when you have to turn the shoulder ties right sides out and then when you have figure out which bodice middle pieces go which direction and where. The ties are small work and the middle sections require a close visual inspection, so neither part is impossible to accomplish. I myself had to unpick a few times to get the middle sections seamed up correctly together. The dress’ darts and many seams make for the time-consuming part, as well as the fact there is a full bodice lining going inside to face all the raw edges. I don’t recommend leaving out the inner lining because it does provide a more stable garment, a better shape and hang, no see through when your middle panels are light colored like mine, and also very nice finish. Believe me here – after all I did try on the dress (just to see what the difference would be) with just the top lining and didn’t like that at all until fully lined. As tricky as the middle lower bodice panels made the construction, I admire shaping of this section – it has a curving which I normally see on many patterns from the 1950’s. Real shaping means a piece of clothing made for the curves of a real woman, unlike many patterns from “The Big Four” which are more straight lines than anything else. 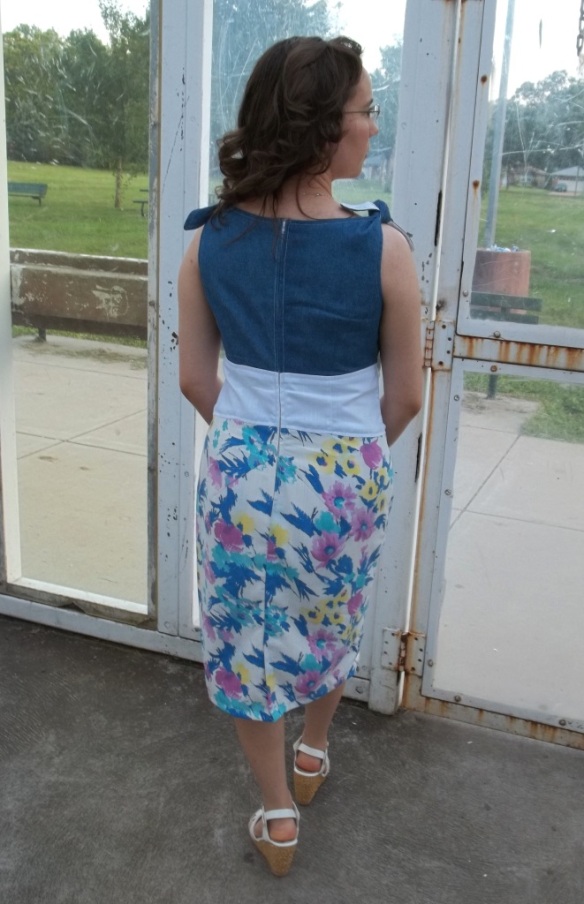 Notice the darts which tailor the back of the dress skirt section just above the booty. They slant at an angle between horizontal and vertical coming out from the center back where the zipper is installed. I love this part of the dress! My lower back just above my booty is a spot with a lotta’ curve which I always have to watch out for in making my own clothes. Oftentimes I get wrinkles at that spot in my clothes from the wrong fit before I tailor them and this Burda dress with its special darts is the answer to my ‘problem’. I’ll have to remember this new kind of dart and add/adapt it into other patterns, too.

The skirt’s shape is slightly tapered in much like a pencil skirt, but the back vent helps keep it from being confining. Happily the back vent is a fold-over kick-pleat style so it is generously cut yet still decent. 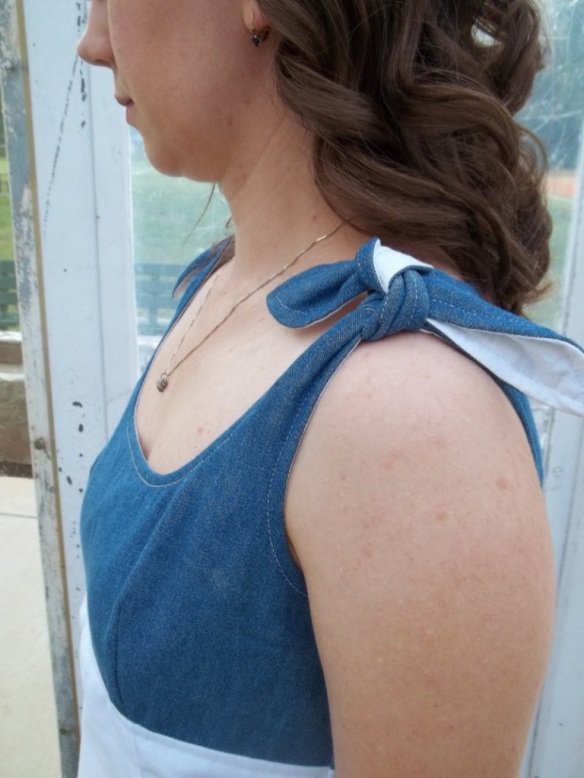 The shoulder ties are the unique feature that really makes an already cool dress go up a notch in style. Truth be told, I did have a hard time tying the two knots in such a way so that they were not uncomfortable. I had to tie knots that were relatively flat like a box and find the right length for the straps at the same time. Some trial attempts and frustration was involved here…

Shoulder ties are nothing new as a style feature but still special, popping up in fashion though the past decades. In light of my “Retro Forward with Burda Style” series, see my collage with patterns from the 1930’s and up. I love the way the 30’s did tie shoulders such as New York #238 and McCall #7746, from 1939. The 1940’s don’t seem to have as many tie shoulders, but look at Simplicity #3833, year 1941, and a Mail Order pattern for two examples. 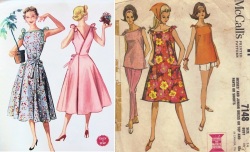 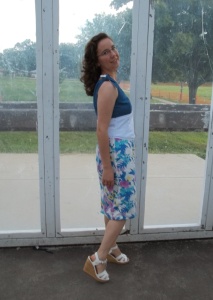 I don’t know how much shoulder-ties on garments are utilitarian, versatile, or pure gratuitous, but it certainly makes things interesting and fun, adding a bit of interest in a place not as commonly expected. “Fashion” might come and go, but “style” persists through the test of time. If the shoulder tie feature has lasted most of the 1900’s, than there must be something worthwhile. Once you make one, you might be unsure (as I was), but I hope you’ll tend to agree with me that shoulder tie garments are worthwhile and a very good different. Different is good for me in my sewing…I think it keeps skills sharp and piques interest.

I don’t mean to dish out a selling line to you good readers, but – really- there a lot to offer here with this dress. Anyone who has a stash of relatively small portions that could use a makeover and thus see the light of day (this is many of us, I’ll bet) should definitely consider this Burda Style pattern. This in itself will make any “stash-saver” happy and think of it as a big “mix-and-match” game. Also, any woman who has curves, too (and isn’t that every) will benefit from the illusion of the panels and their shaping. Besides all this, it’s not all that hard to make. You’re using a style history-tested and proven worthy. I’ve told you enough about my own take on this pattern, so here’s you turn. Try it for yourself and let me know so I can read what you think of your own version. I love seeing other people’s creativity.

Speaking of creativity, I’ll end my post with my first attempt at a gif file. It’s kind of like a happy head shake.

This post is part of my “Retro Forward Burda Style” series. 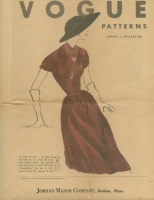 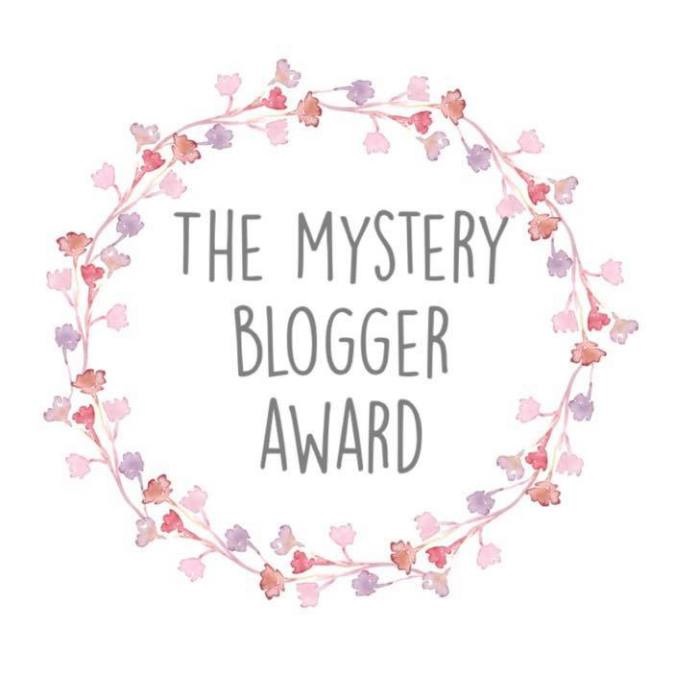